Air Mobile Ministries
Air Mobile Ministries is a 501 (c) 3 non-profit organization that does disaster relief all around the world. Since its inception in 1978, AMM has traveled around the world many times bringing medical supplies, food, clothing, and now the Vortex Voyager TM water purifier to those in need. Joe Hurston and his team of volunteers have worked to help disaster victims after hurricanes, tsunamis, earthquakes and war. Since 2004, AMM has been heavily involved with bringing relief in the form of water purification. The Vortex Voyager TM water purifier is an amazing, life saving tool. At a mere 20 pounds, it can produce up to 30 gallons of pure water every hour. Mission Statement Air Mobile Ministries is a faith based evangelical group that provides disaster relief. Our mission is based upon the words of Jesus in Matthew 25:35 and 40: "I was thirsty and you gave me drink." "Assuredly, I say unto you, inasmuch as you did it to one of the least of these my brethren, you did it to Me." www.airmobile.org myspace.com/airmobileministries www.youtube.com/airmobileministries

Water continues to be a blessing in Myanmar 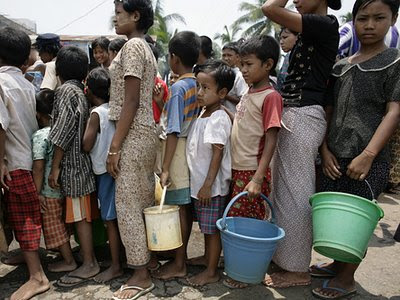 Joe reports that the team has been out in some hard hit areas pumping water daily. They have also trained a great number of relief workers on the Voyager. Our friends from In His Image in Tulsa, OK will be arriving tomorrow and will be trained on the Voyagers by nationals that have been trained by Joe and the AMM team!
We just love how God works out the details of these missions.
Please pray for Joe as he has gotten an intestinal bug and it will make his traveling back very uncomfortable. He said he ate something that wasn't quite right.
Otherwise, the mission is going well. The need for water and aid of all kinds is overwhelming. The suffering is unimaginable. Please pray for the people and do what you can to help.
God Bless,
Cindy
Posted by Air Mobile Ministries at 7:48 PM No comments:

I just received several short, broken phone calls from Joe. He and the team spent the day purifying water for survivors. He said that Barbara and Joe Prussel had six Voyagers pumping water all day in two locations. He and Dennis West trained a large group of relief workers on the Voyager. There is a great need and therefore great receptivity for this machine. Joe is keeping a close eye on the new storm heading their way. They are safe in their hotel, but the storm will increase suffering for those already affected by the previous storm. We are praying about the possibility or either going to China or sending units there to help in the earthquake aftermath. However, the needs in Myanmar are immense and could keep workers busy for a long time. I know that God is keeping His hand on our team. Thank you for the prayers. Cindy Hurston
Posted by Air Mobile Ministries at 6:58 PM No comments:

May 13th 5PM here, 4 AM in Rangon. Just received a phone call from Joe. He and the team are at the Hotel in Yangon, Myanmar. All of the Voyagers made it past customs. Joe sounded weary which is understandable. He said the devastation is horrible. They have already made contact with several area Pastors who will be taking them out into the disaster stricken neighborhoods tomorrow. They have had some amazing "Divine Appointments" with key people. I am looking forward to hearing the stories, but for now they are not able to communicate by email and the phone service is limited. I will keep you posted if I hear anything else. Love to all, Cindy Hurston P.S. Dieunika will be going in for her fourth surgery on Friday. She is such a sweet and brave little girl. Thanks for the prayers.
Posted by Air Mobile Ministries at 2:01 PM 2 comments: 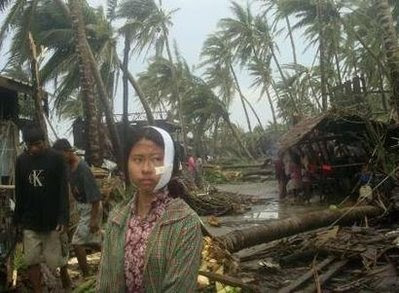 The Air Mobile team just landed in Bangkok, Thailand at midnight Bangkok time. In just a few hours, we'll catch a flight into Yangon, Myanmar. So much has happened this week. It's so amazing that in just a few hours, we'll be landing there with 25 Vortex Voyagers. These units can provide clean water to 1200-1500 people per hour in 25 different locations!

We just got news of the huge quake in China (7.8) and the death toll is quickly rising. The last report was 9000! We're with team members that had already had plans to travel to China from Myanmar (World Compassion). Our Lord certainly knows how to deploy His troops.

Though the tragedies are striking, it is so good that we can actually do something about them. We count it a joy and privilege to be alive in this hour! You are part of this with your prayer, love and support!!

Meanwhile, the reports coming in from Myanmar are terrible and the situation is becoming worse by the hour. So many pieces have come together to make this trip possible that we just know that the hand of the Lord is upon us. While many have been unable to secure visas to enter in, through the Lord's amazing grace, we have secured visas! Please, please remember to pray for these precious people.

The following report just came in......


Oxfam warns 1.5 million at risk in Myanmar as some aid reaches survivors

The Associated Press
Sunday, May 11, 2008
YANGON, Myanmar: More food reached Myanmar's hungry cyclone victims as roads were cleared of fallen trees, but a British aid group warned that up to 1.5 million face death if they do not get clean water and sanitation soon.

She said the death toll from the May 3 cyclone could go up to 100,000 — a figure also suggested by other aid groups.

"There are all the factors for a public health catastrophe which could multiply that death toll by up to 15 times," she said.

Myanmar's military junta said 23,335 people died and 37,019 were missing after Cyclone Nargis slammed into the country's Irrawaddy delta and Yangon, the country's biggest city. The U.N. said about 2 million people were severely affected.

Fishing boats along the coast helped ferry survivors to safety but diesel supplies were running low and rescuers feared time was running out for those stranded in remote delta villages.

"Some have been living on coconuts," said Maung U, a 36-year-old driver of a rescue boat in Labutta. "But even those are running out."

Yet the government has refused to let in most foreign experts who have experience in handling humanitarian disasters. It insists it is capable of distributing the aid being pledged by international donors.

Aid group World Vision said it has requested visas for 20 people and received approval for two, while the U.N. World Food Program had one approved out of the 16 it requested. Still, the U.N. was making some progress in aid delivery.

The junta released 38 tons of high-energy biscuits to the WFP which were confiscated on Friday.

"We're delighted and very encouraged by what is a very positive sign," said WFP spokesman Marcus Prior.

He said a Thai Airways flight ferried 4.4 tons of high-energy biscuits for the WFP on Sunday, and a second flight from Italy would bring 30 tons of supplies and equipment later.

The International Federation of Red Cross and Red Crescent Societies said three of its planes delivered 14 tons of shelter materials, replenishing its stocks already in the country before the cyclone.

"Aid is getting through in increased amounts," it said in a statement.

But World Vision, which has a big presence in Myanmar, said relief material delivered so far is a drop in the ocean.

"It is very obvious that of the thousands of people who have been helped there are tens of thousands who have not been reached," World Vision's Samson Jeyakumar said in Bangkok. He said its supplies were running out in Yangon.

Many survivors have been without help for more than a week after fleeing their inundated villages to take shelter in monasteries and schools in towns. The canals and flooded roads to higher ground were littered with the bloated bodies of humans and animals. The stench of death was everywhere.

"What is critical at the moment is water sources," said Oxfam's Ireland.

"We understand a lot of water sources are contaminated. Ponds are full of dead bodies. Something as basic as a bucket is in scarce supply. If people don't have water that is clean and safe, that is very difficult," she said.

"With floodwaters fouling water supplies and latrines overflowing with human waste, all the factors for an outbreak of cholera and shigella are in place," an Oxfam statement said. Stagnant waters can breed mosquitoes, raising fears of dengue and malaria.

Another Oxfam official, Ian Woolverton, said although the aid group has warned of a possible 1.5 million deaths, that was a worst-case forecast — and one that could be prevented.

At relief camps, long lines of people waited to collect rations of rice and oil. Where there were no camps, people clustered on roadsides hoping for handouts. "Help us!" was written in chalk on the side of one home.

"Please, don't wait too long," said Ma Thein Htwe, 49, who waited with dozens of other women and children at a monastery in Kungyangon for her ration of rice.

Ko Zaw Min, 27, said not enough aid was reaching his community. Each family was given only about a pound (about half a kilogram) of rice a day.

"I want to build my home where it used to stand, in the field over there," said the farmer, who lost his 9-year-old son and month-old baby in the disaster. "But I have nothing."

This situation is extremely critical.

We understand it is quite difficult to communicate out of Myranmar, but we'll do our best to send reports.

Well, it's very late and the wake up call will be in just a few hours, so I'd better sign out.

Thanks again for your prayer! God Bless! 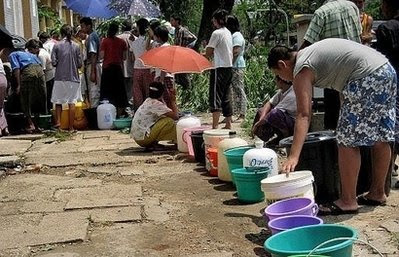 Air Mobile is on the move again! This time, we are attempting to bring in 25 Vortex Voyager water purification systems following the monumental tragic Cyclone that ravaged Myanmar. As I write, the death toll is over 50,000 and rising.

Our main obstacle at this time is securing the Visas to enter Myanmar. We are making many attempts to contact the appropriate authorities to secure the authorization. We are very glad to say that we have already received the committment from one organization to fund 20 Vortex Voyagers.

Just prior to receiving this information, we at Air Mobile had already decided to go to Myanmar with 5 Vortex Voyagers. Now, we can bring in 25! These units WILL save lives! The need for clean drinking water is the number one problem in Myanmar. Please pray that we receive the clearance to go!

I will write more later. You may view the latest newscast by going to: www.wftv.com and click on "Local Organization Heading To Myanmar With Water Assistance For Victims". Stay tuned and please keep praying for us!